Crude oil prices are trading lower on the day as near-term supply-demand imbalances appear to be easing. Markets are focusing on the subtle yet important shifts in the United States, where, according to the EIA’s weekly report, crude oil production has increased while demand has started to cool off.

While the European Union failed to ban Russian coal and oil imports, citing a technical error, it appears that another attempt will be made to do so tomorrow. This could introduce more two-way volatility into energy markets, casting into doubt the validity of any technical developments on the charts. Until then, however, with markets focused on data from the US, a bearish breakout is starting to gather pace from the recent symmetrical triangle in crude oil prices.

Crude oil prices have a relationship with volatility like most other asset classes, especially those that have real economic uses – other energy assets, soft and hard metals, for example. Similar to how bonds and stocks don’t like increased volatility – signaling greater uncertainty around cash flows, dividends, coupon payments, etc. – crude oil tends to suffer during periods of higher volatility. The sharp drop in oil volatility over the past two weeks has not been met with a corresponding slump in oil prices, even if oil prices have come down back below $100/brl. 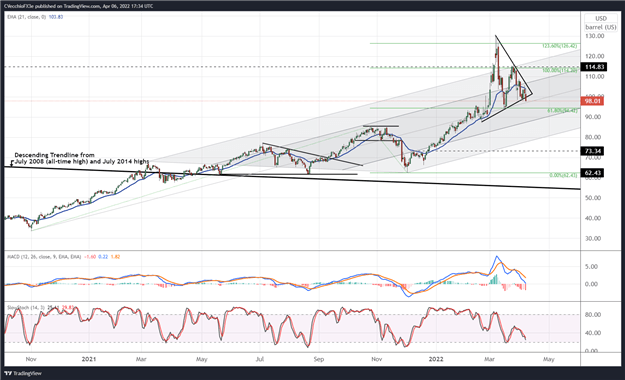 Last week it was noted, that “crude oil prices are beginning to consolidate into a symmetrical triangle, which in context of the preceding move higher, would call for a bullish breakout. But in this environment, dominated by spontaneous headlines on the news wire, it may be best of consider the symmetrical triangle a neutral pattern that could yield a breakout in either direction. The apex of the triangle will be reached by the second week of April, meaning a breakout back to the March high above 130 or back to the late-February low (base of the triangle) should occur sometime soon.”

Consistent with this view, a bearish breakout may be getting started. Crude oil prices are trading below triangle support, and bearish momentum is gathering pace with prices below their daily 5-, 8-, 13-, and 21-EMA envelope, which is in bearish sequential order. Daily MACD is on the verge of dropping below its signal line, while daily Slow Stochastics are on the cusp of entering oversold territory. Targets lower include the March 15 low (93.53) and the February 18 low (87.46). 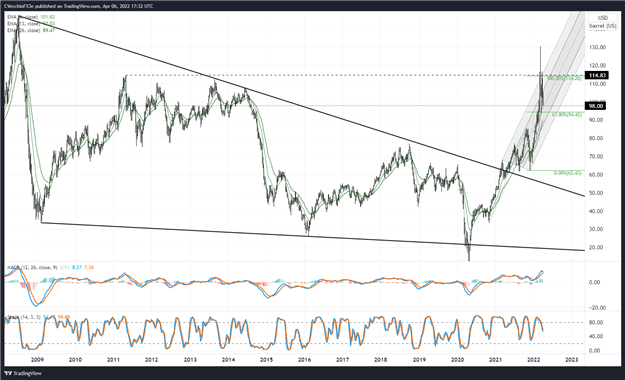 On the weekly timeframe, there is more evidence that momentum has stalled. Crude oil prices are now below their weekly 4- and 8-EMAs, even as the weekly 4-, 8-, and 13-EMA envelope remains in bullish sequential order. Weekly MACD is on the cusp of issuing a sell signal (albeit above its signal line), while weekly Slow Stochastics are continuing to trend lower towards their median line. It remains the case that “if the aforementioned symmetrical triangle yields a breakout, it will likely be in a quick, violent manner that won’t necessarily be reflected on the weekly timeframe until after the fact; focusing on lower-term timeframes (4-hour, daily) seems appropriate for the foreseeable future.” 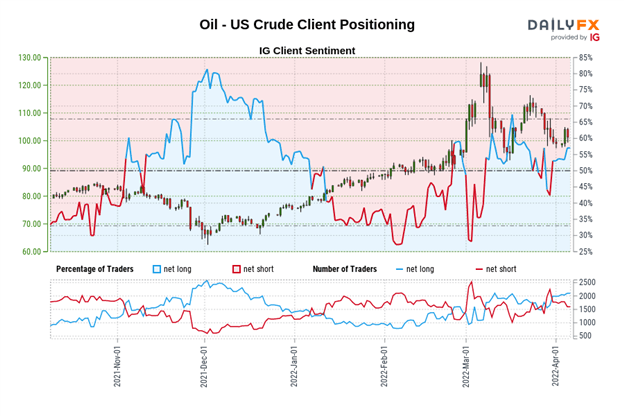 We typically take a contrarian view to crowd sentiment, and the fact traders are net-long suggests Oil – US Crude prices may continue to fall.

Traders are further net-long than yesterday and last week, and the combination of current sentiment and recent changes gives us a stronger Oil – US Crude-bearish contrarian trading bias.