Get Your Free GBP Forecast

The British Pound’s rally this month is showing signs of fatigue as it tests key resistance, pointing to the possibility of a range developing in the near term. However, the case for a broader base-building process isn’t closed yet.

On the 240-minute charts, GBP/USD has been capped by stiff resistance on the 200-period moving average since the rally began early October (see chart). Moreover, even though the initial rally was quite sharp, momentum as measured by the Relative Strength Index (RSI) failed to make new highs. In the past two years, similar rallies were capped around the longer-moving average, with RSI capped under the 70 mark.

Furthermore, on the weekly candlestick chart, the long wicks of the candles around resistance at the late-September high of 1.1450 (and the 10-week moving average) reflect rejection at higher levels, indicating that the market is not ripe for a bullish break just yet. Previous rallies have been unable to decisively clear the moving average. On the weekly charts, the behaviour of RSI is no different this time around than it has been in previous corrective rallies.

The implication of the above is that on its own the rally this month is not sufficient to draw a conclusion that the worst is over – indeed, if history is any guide the rally can be perceived as a so-called “dead cat bounce”.

As it turns out, there are three scenarios that could play out in the short term. Firstly, any break below immediate support at Friday’s low of 1.1150 would confirm that the upward pressure had eased. Such a break could open the way towards crucial support at the October 12 low of 1.0925. A hold above 1.0925 would raise the odds that the rally this month is more than a dead-cat bounce. 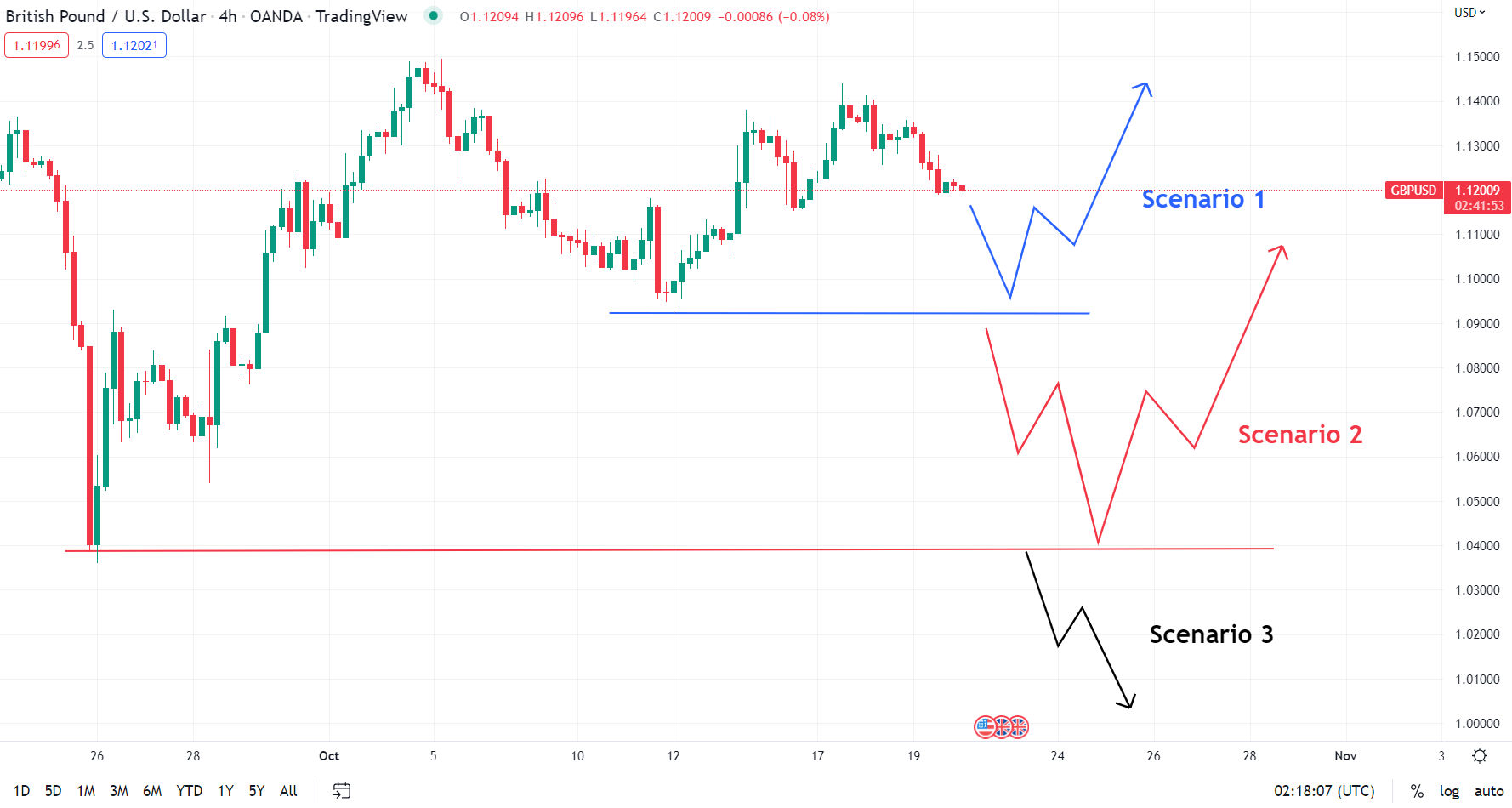 The second scenario is if GBP/USD falls below support at 1.0925. In such a case, the odds that the October rally is a dead-cat bounce would rise. Such a break could expose downside risks towards the early-October low of 1.0385. However, it would keep alive the case for a broader base-building scenario, which often can unfold in multiple retests of major lows before a sustained rally unfolds. In technical parlance, the multiple retests of lows can be termed as ‘accumulation’.

The third scenario is if GBP/USD decisively breaks below the 1.0385, not just on an intraday or an intraweek basis, but one or two weekly closes below the support. In such a case, the base-building case would be put to rest until the pair is able to find a new equilibrium level.

How to Trade GBP/USD

As pointed out early October, the case for GBP/USD making an interim bottom (the early-October low of 1.0385) can’t be ruled out, given positioning, sentiment and developments on higher timeframe charts. But because market bottoms tend to take a relatively longer time to form than market tops, any base-building process could be prolonged (excluding a V-shaped rebound).

Furthermore, as highlighted in last week’s piece, the possibility of a drop towards this month’s low or a retest of it is not negligible. The downward momentum on the monthly chart, while stretched, is yet to turn around meaningfully. All of this implies that while it is far from clear that the worst in GBP/USD is over, the risk/reward math in anticipating a substantial drop below 1.0385 may not be that attractive.